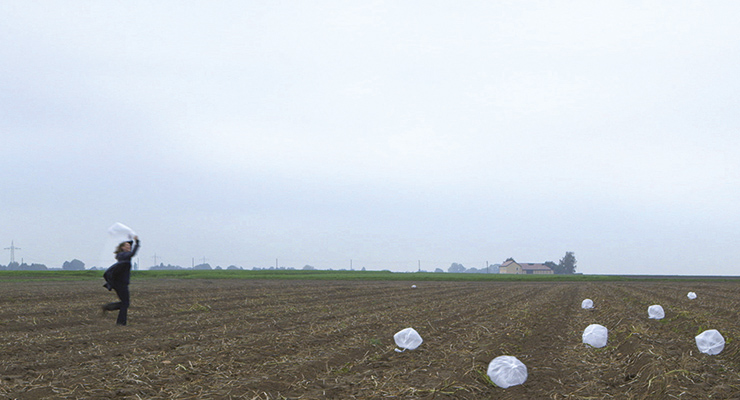 This was often the first question I was asked when talking about my filmproject. And then many question followed – question I had asked myself when thinking about a responsible approach to my new property. While investigating the given possiblities it became obvious, that I did not have many options and that I had no idea how agriculture is really working on a daily base. At the same time I became more and more connected to my field. From my background as a visual artsit I also looked at the parcel as a playing field where I could approach the soil, the potatoes, the air and the measurements on a direct and physical level. During my research I was fascinated by the historic filmmaterial I found and the traditionel methods of cultivating the land I learned about. Obviously there is no way back in the past and it would not lead to a more sustainable pratice with soil today – but looking back can clarify why the connection to what feeds us everyday has been lost: Only very few people actually work with the soil and do cultivate food, so many people have lost touch and in consequence lost the sense of responsibility. I think this is what the film is about. I hope that my approach to the subject wil trigger all kind of thoughts and associations in the viewer through my observation and my failure too.

Monika Pirch was educated as a photographer and media artist at the University of Applied Science in Dortmund, Germany and graduated at Chelsea College of Art in London. Since 1996 her videowork has been exhibited regularly in Germany and Europe. Since 2007 she creates videoinstallations for theater productions and works as an editor for documentaries and shortfilms for independent filmmaker and various television productions. "1ha 43a" is her first film.
www.monika-pirch.de